What is it about Public Speaking? 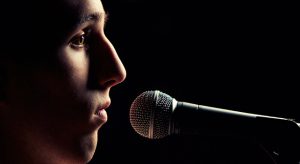 Jane was having trouble with “performing”.  Standing up in front of people to present information did not feel natural.  It was high pressure and intensely worrying.  What she really wanted was to see public speaking as quite natural and not a performance; to feel comfortable enough in herself so that she could engage her audience in a steady and interesting flow of words.

She noticed this natural feeling when she spoke on various topics with friends. There had even been a handful of times in which she spoke confidently up the front and enjoyed herself.  When she looked at those experiences closely the key for Jane seemed to be ‘connection’.  What had worked for her was an authentic connection with her audience, herself and with the topic she was speaking on. During those occasions it all seemed to come together beautifully.  Why then, would she go on to feel so incredibly nervous in doing something that: a) she’d already done successfully before; and b) had gained a lot of satisfaction doing?

With the various demands of her work, Jane’s anxiety around performance kept appearing.  As soon as she was given the challenge, however far off the date was, it made it’s presence felt on her sub-conscious radar.  She’d begin thinking about it at odd times, and then all the time.  Not the excited kind of thinking, but the ruminating type where thoughts get repetitive or go nowhere. “What will I say?  Will I be interesting enough? What if I get super nervous again?”  Despite the presentation being weeks away, it was as if her body was preparing her for something that was bigger than it actually was.  She found herself feeling a little bit too energised; that jumpy state of over-alertness that prevents one from being completely in the moment.

Jane knew that she was a procrastinator at the best of times.  Perhaps if she began preparing the presentation immediately then she’d start to see that it wasn’t as big a deal as her mind and body were trying to tell her.  So she sat down to write a draft and, as the minutes of concentration and focus progressed, the worries and uncomfortable feelings began to dissipate.  The more she used the rational thinking part of her brain, the less her feelings could dominate.  Using the structured and organised side of herself she was able to complete a full ‘outline’, helping her to feel more in control.  Admittedly, much of the talk was still to be fleshed out but there was time for this later.  For now, she felt much better.

Several days passed uneventfully.  The jumpy feelings were manageable and there were enough demands in her home and professional life to be distracted by.  Soon enough, the actual week of the presentation was upon her.  If the diary hadn’t told her, the symptoms in her body certainly had.  The energy was palpable; getting her ready for what seemed like a climb up Mt Everest but was actually just standing up in front of a group of people to speak.  Her psychologist (whom she saw for a bit of help) later explained that these physical sensations were simply the body doing it’s job in the fight/flight response.  A bunch of messages from the brain to the body preparing her for action and potentially enabling her to perform well.  This mechanism is perfectly normal when it occurs briefly before the event, but is a sign that it needs managing if it is experienced too far in advance.  Ok, so what would calm her down?  What would make the sick feeling in her stomach and the racing heart go away?

Jane had noticed that sitting down and preparing her talk a few weeks prior had helped her to feel more in control.  Why not just do that?  Alas, she tried but it was useless. Constructive concentration when the presentation was only 2 days away seemed out of her grasp.  She was stressing out badly in her thoughts: “I’m running out of time!  Why didn’t I finish my preparation when I was calm? Now I can’t think straight.”  She felt down on herself and worried about not doing a good job: “I’m hopeless at this; why am I even doing it?  What if I freeze or my words get all muddled?”

She would need to try some different approaches.  How had she managed these situations in the past?  What seemed to work when it came to slowing herself down?  If she could manage this, then she might be able to sleep and then think more clearly upon waking.  Perhaps some exercise to take her mind off things and regulate her breathing?  And after that, she’d ring a friend who could empathise and listen as she bounced around a few ideas for the talk.  Jane knew that she had turned a corner when gradually she found herself feeling calmer and even thinking “hey, I have a lot of good things to share about this topic”.  Focussing on all the things she knew – both about herself and the content of her talk – enabled her to feel more confident.  No time to waste, she was off and away.

When the day of the performance came, Jane’s nerves returned with a vengeance. Somehow she’d managed to finish her preparation but now she just needed to execute. “Breathe and take it slow, breathe and act normally”she told herself.  Put your feelings in their place and put your mind on the job. Remember how you love this topic?  If you show your passion for it, the feelings will follow and then your audience will engage and you’ll find yourself connecting”.  And up she stood; with calm and with confidence.

What is it about public speaking?  It comes naturally to some but is a source of great anxiety for many.  Approximately 3 in 4 people experience “glossophobia”:  fear of speaking or performing in public (https://en.wikipedia.org/wiki/Glossophobia). It’s real and it’s intense. Many have not experienced some of the small successes that Jane could draw on.  If you are one of these people and you want to address it; there is hope and there is help.  Keep your eye out for future presentations in which I, Sarah (a little bit like Jane:), shall seek to work on some of my own fears around public speaking by – err umm gulp – doing it.  It’s guaranteed to be authentic (but not uncomfortable). Please contact us at The Resilience Centre if you’d like to to be notified about what Sarah is doing on this topic in the future.

Sarah Piper is a Registered Psychologist at The Resilience Centre in Sydney.

Find out more about Sarah by clicking here. Email her at: sarah@theresiliencecentre.com.au

What Happens When We Forgive